Harvested carrots from the greenhouse! 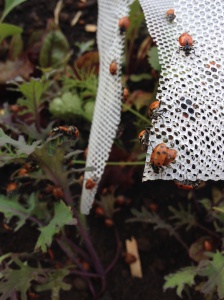 Picked these beautiful green destroyers out of the greenhouse and released ladybugs to eat the aphids.

This year we grew various potatoes. The pink and the purple were the most beautiful. The color equals more nutrients. Thank goodness that people in the seed saving world are keeping the incredible diversity of potatoes alive and accessible to gardeners!

I have the best friends! Just broke out this beautiful gift from a blossom buddy. This sweet spiced and herbed brandy is the perfect partner to a dark winter new moon walk. Lets all make some for ourselves!! I wish a little of this came out of the spring in oak creek!

I got married this summer which was super fun. We had a potluck and played kickball. Feelin’ pretty sappy about it today!

10 years ago my sweetheart made me an unanticipated breakfast. There was hardly a thing in the house so we each had a microwaved potato with cumin and tomato paste.

For this inspired dish pictured above I popped the whole cumin seed in oil. Then I added cubed red potatoes that I previously soaked in some salt water so they would be less gummy. Cooked them until they browned some and were tender. Then I added cherry tomatoes we grew in the garden and some baby chard and spinach. A little garlic powder and salt, and the ‘first meal’ is reinvented.

Planting in the hoop house

Today we finished cleaning up the hoop house from a summer and fall as a tomato bed. We planted peas, dinosaur and red winter kale, bok choy, tat soi, purple orach, chard, radicchio, cilantro and purslane. 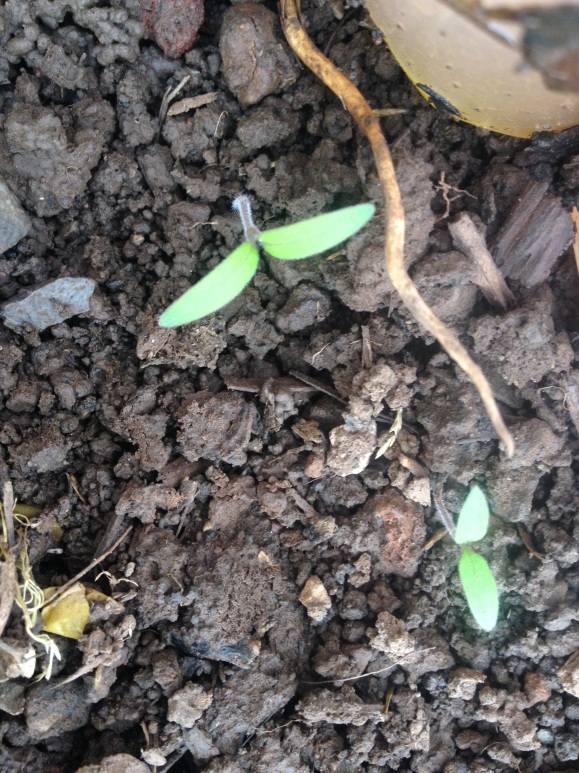 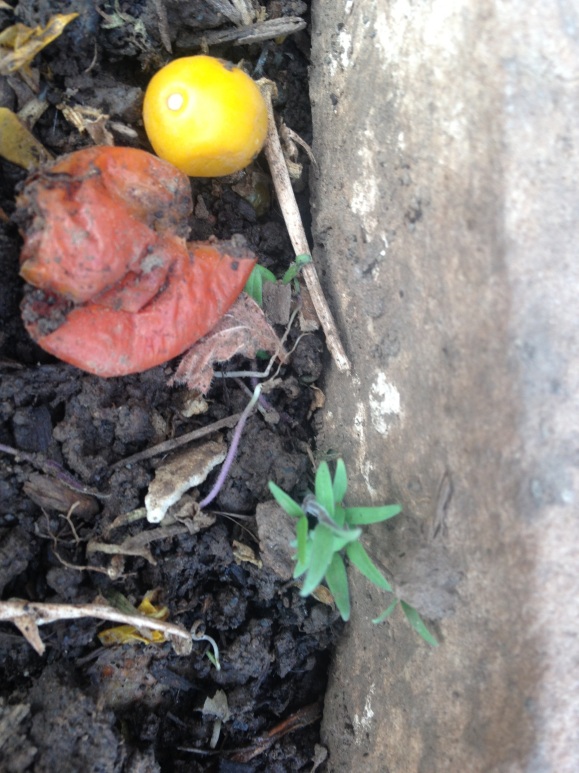 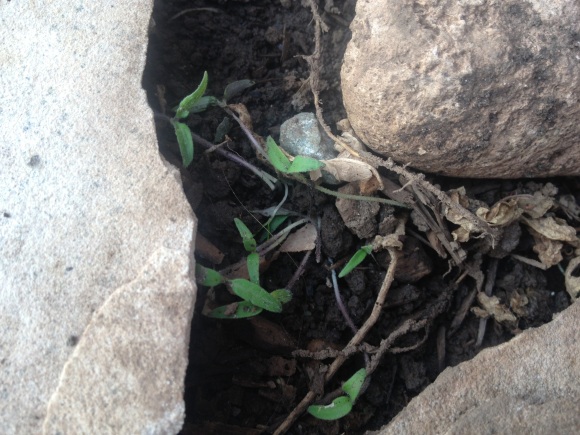 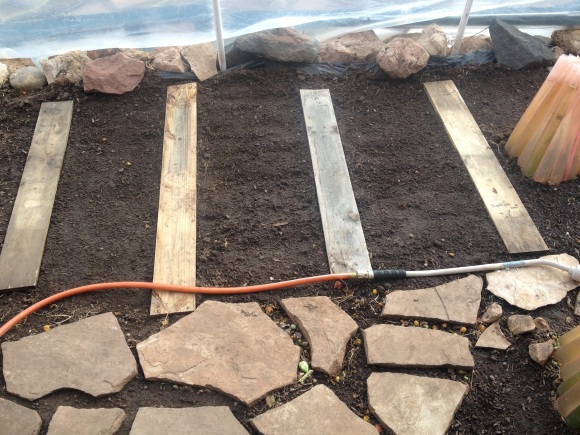 We have tiny volunteer tomato plants all over! Some of them made it through the clean up today. We’ll see how far they get…

This fall we made some delicious salsa. The ‘brown berry’ and yellow tomato varieties made the tomato base syrupy sweet. I used onions, garlic, cilantro, serrano chilies (that my mom grew at a lower elevation) cumin, lime juice, salt…I think that’s all. We ate a lot fresh, and cooked & canned some up too.

We also experimented with growing high elevation green chili plants and had some luck. The plants were leggy because I planted them too near some extreme tomato vines, but they fought to survive and we got a few chilies. We dug the plants up and brought them inside. 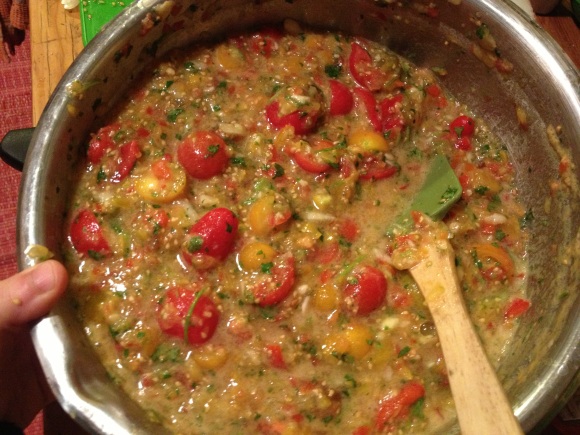 This fall we had a lot of tomatoes to preserve. I dehydrated them and then stored them in olive oil. The fruits softened up in the oil. I’ve been storing them in the fridge and adding scoops to recipes. The oil has an amazing flavor!

This summer was *insane* for cherry tomatoes. This was my first time trying a bunch of different varieties by seed. It ended up being a crazy mess of vines everywhere since I never got around to putting any tomato cages up. Picking was twister. I took as many pictures as I could.

Variety review is as follows:

Isis candy cherry – nice classic red one and a half inch fruits. I didn’t see many with the orange variegation ‘cat eye’ come through as advertised.

Cherry Roma – cute one inch little red Roma tomatoes. These were the least prolific of the six I tried and took the longest time to bare.

Blondkopfchen – my second favorite of the six. Tiny round yellow fruits that formed in incredibly prolific bunches. The fruit was sweet and had a really cute elfin point at the base!

Red fig – pretty and firm pear shaped fruits that ranged in size. We still have one of these plants hanging on next to the house in the corner of the hoop house by the 55 gallon drum we have for thermal mass. Yay December tomatoes!

Egg yolk – very round and sweet yellow fruit; prolific too. When it got very ripe it was near orange but was sweet when yellow and got sweeter.

Brown berry – Winner!!! Nice red brown color. And the sweetest, juiciest tomatoes I have ever had. Highly recommended! 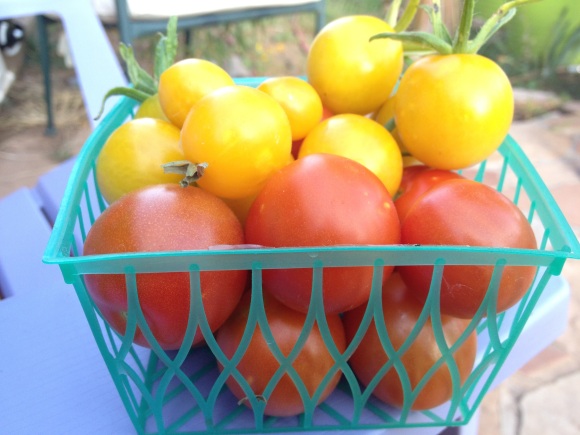 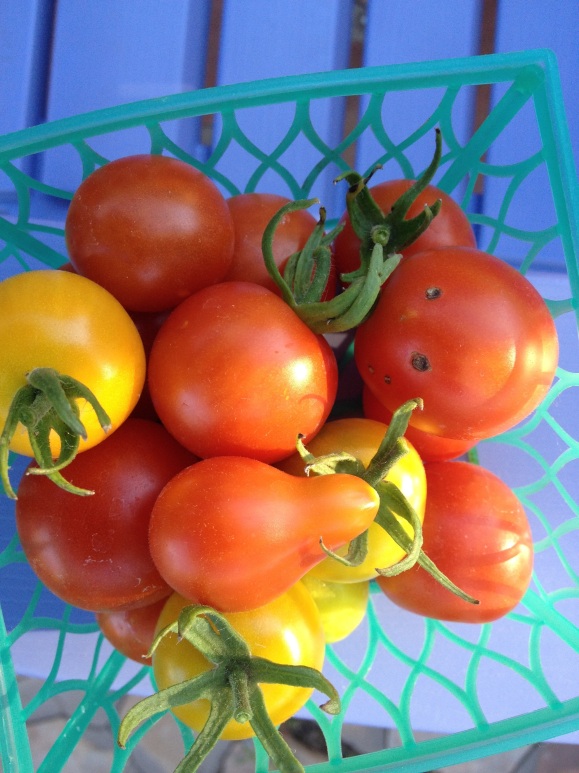 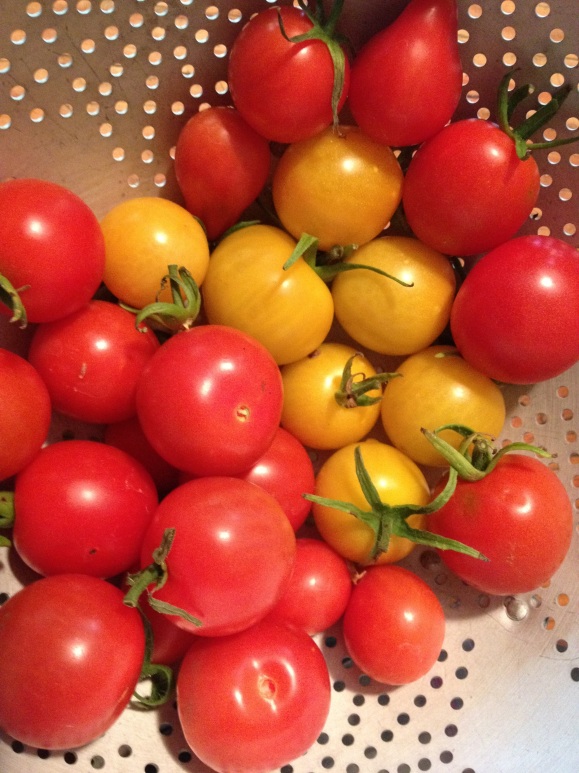 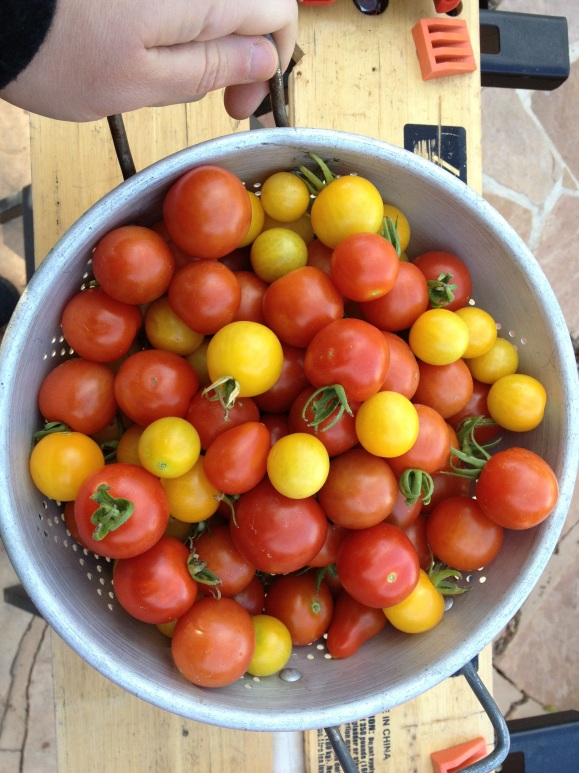 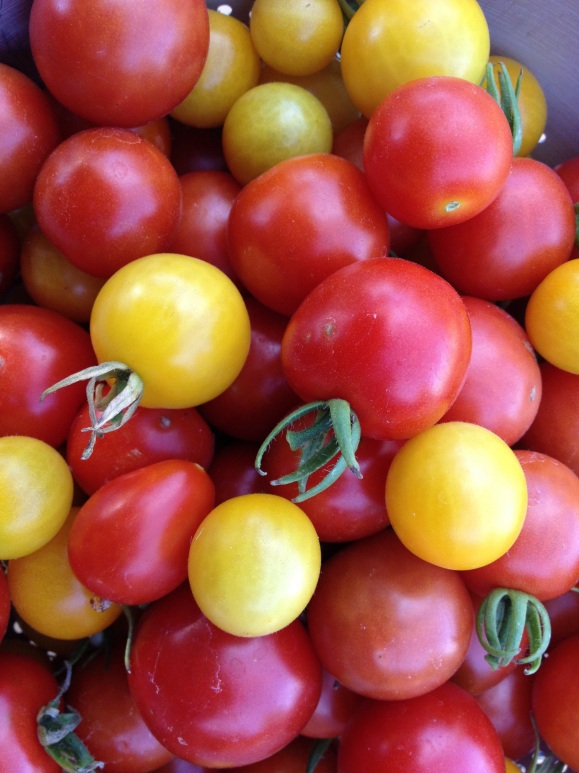 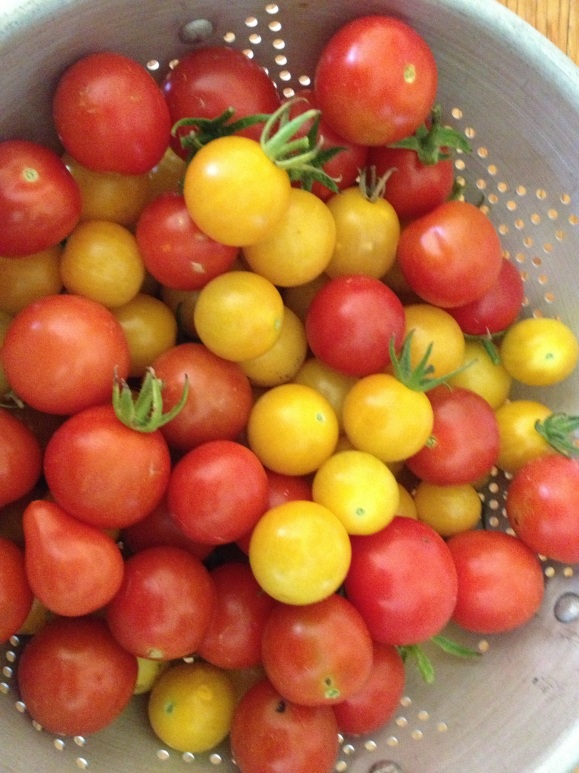 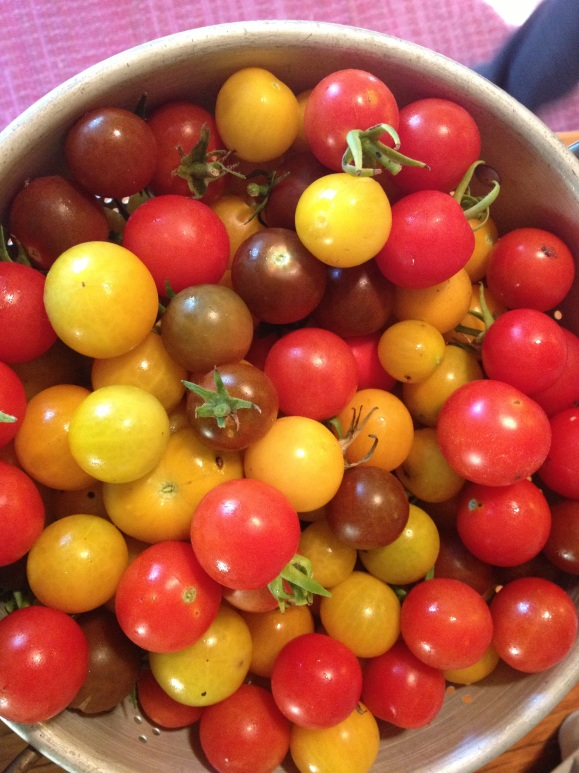 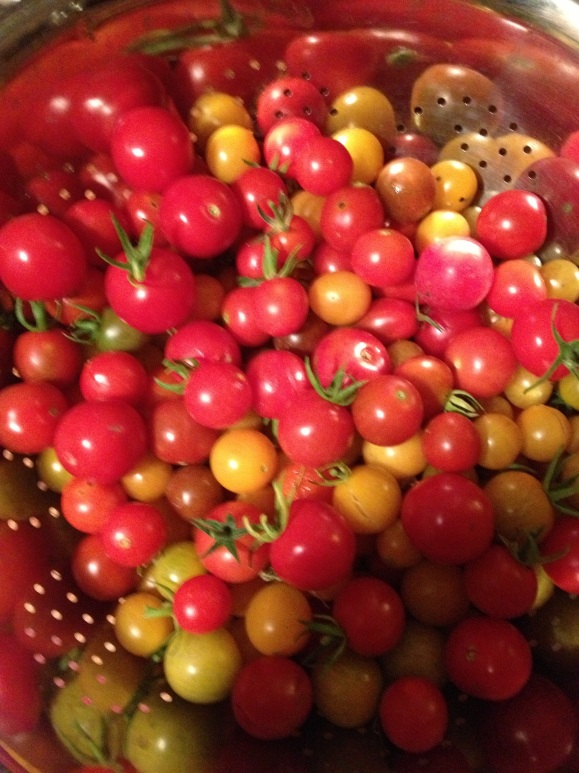 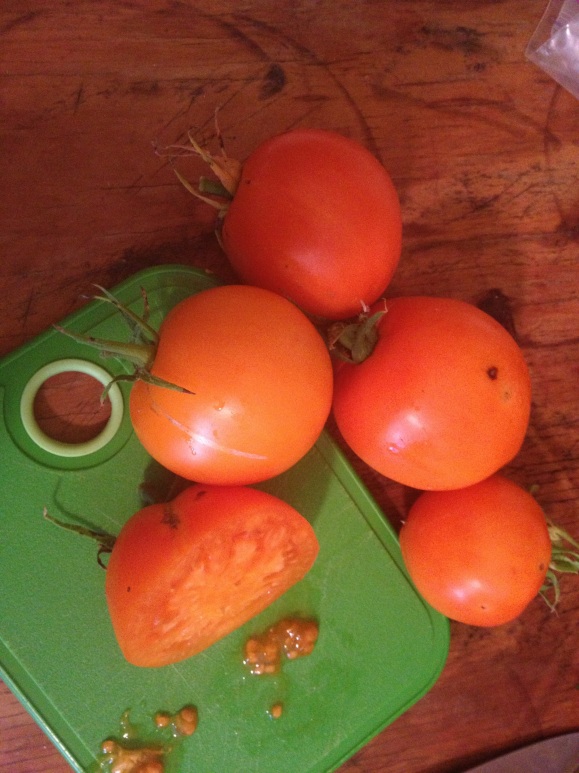 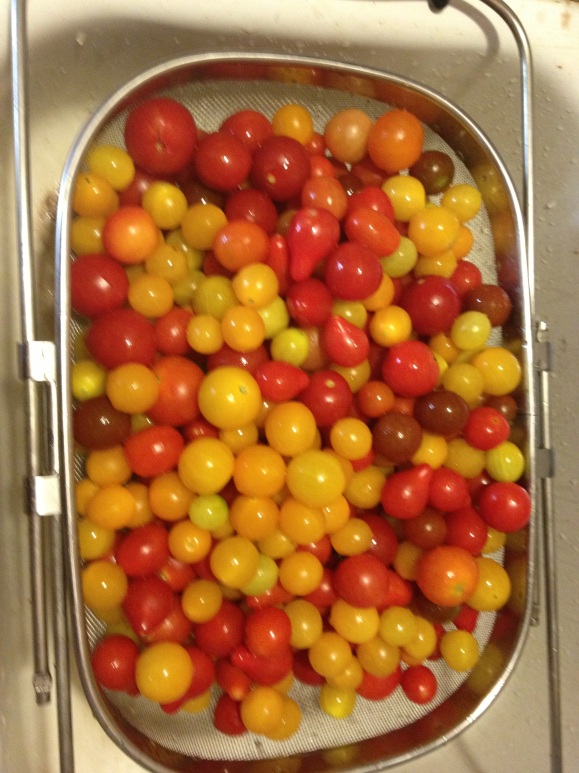 Tragically seedlings must be thinned. I had to have moral support to do this, because it just seems so wrong. I put about two seeds in each cup to prevent duds. Today I had to snip off the weaker ones to give the most vigorous one in each cup room to thrive. Waaah!

We’ll have to see if the chosen ones take off this week. 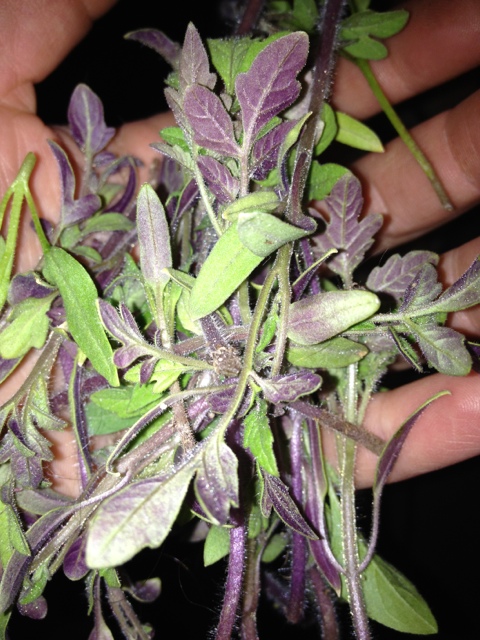